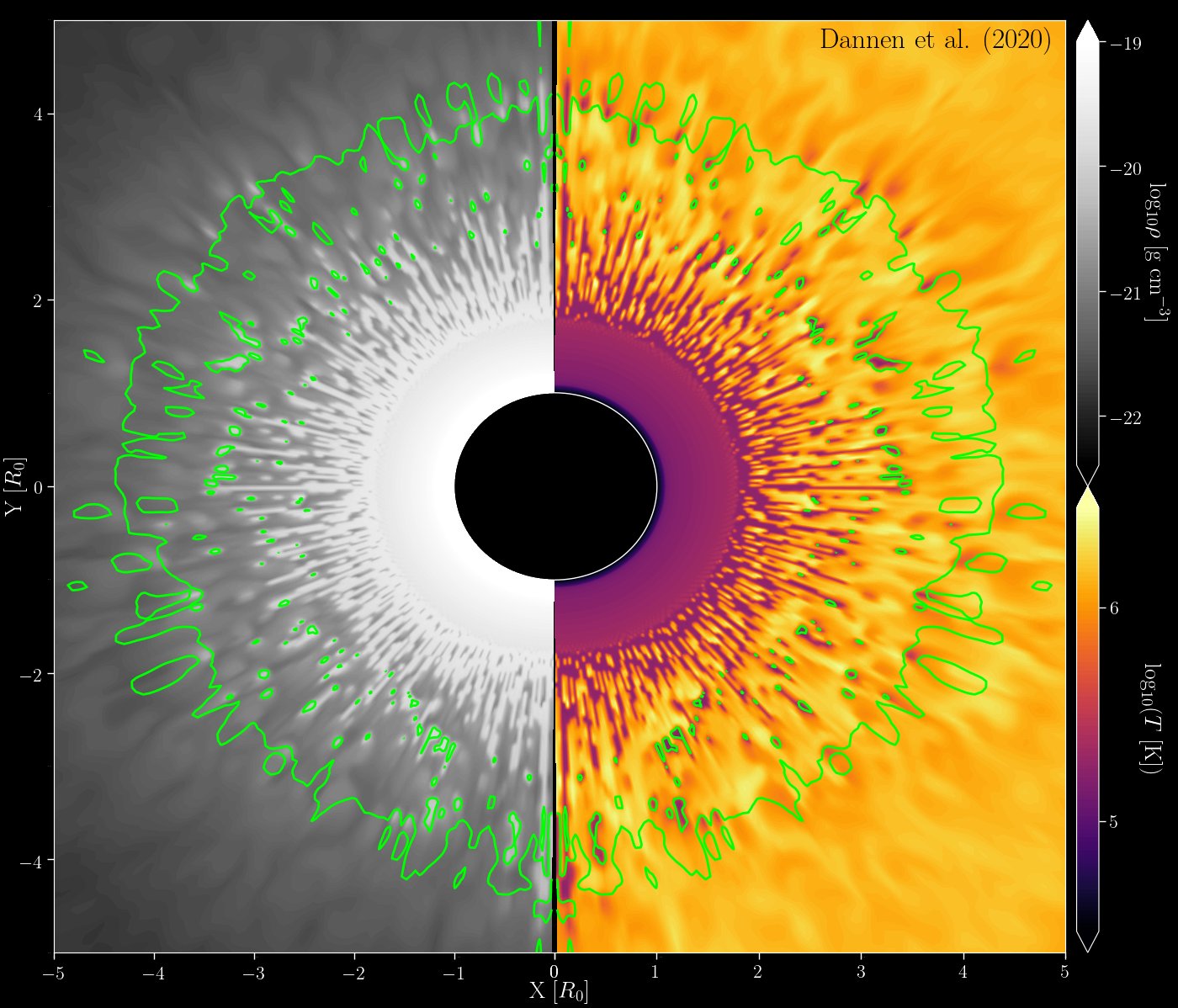 Observations of AGN outflows reveal them to be clumpy. Here is the first ever demonstration that classical thermal instability can be triggered in an outflow, which may ultimately explain such observations. This project was led by PhD student Randall Dannen and was the subject of both a NASA press release and a UNLV highlight.

A classic solution in astrophysical gas dynamics is spherically symmetric accretion onto a black hole. Despite being a highly idealized solution, one would not expect an infintesimal change in the boundary conditions to result in a qualitatively different solution. Yet that is precisely what happens: a tiny density inhomogeneity placed far enough away from the black hole will not permit pure inflow. We demonstrated that an outflow must develop as a consequence of angular momentum conservation. More generally, we showed that solutions to the 'inhomogenous Bondi problem' must satisfy the integral condition shown at left. 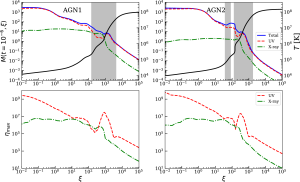 Calculations of radiation forces in AGN

There is a famous characteristic luminosity in astrophysics known as the Eddington limit, which is the luminosity that would give rise to a radiation force equal to the force of gravity, allowing gas to levitate at this limit and get pushed outward above it. The Eddington limit applies to radiation pressure acting on free electrons. If only hydrogen is fully ionized, then there will typically be an enormous opacity due to ions heavier than hydrogen. In this project, led by PhD student Randall Dannen, we calculated the radiation force due to this 'line opacity'. We find that radiation forces can surpass gravity in sources emitting far below the Eddington limit, so that radiation driven outflows are expected to be commonplace in AGN. 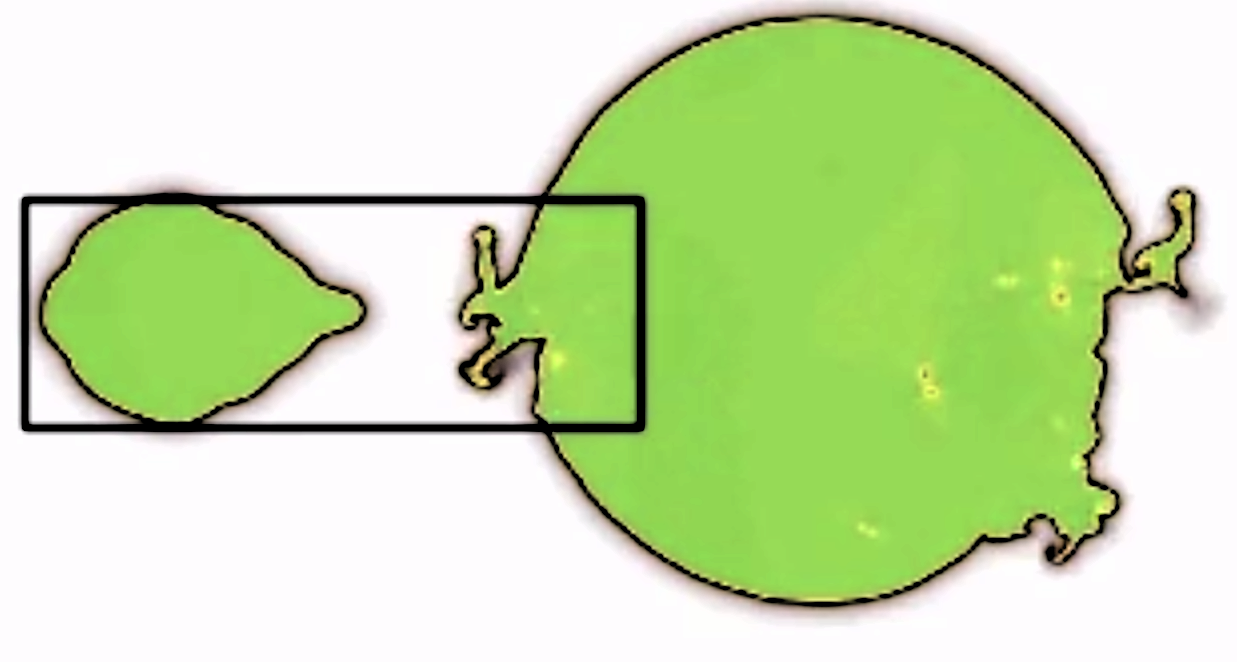 The word 'coalescence' in astrophysics is typically used to describe one of the most energetic events in the universe: the merging of binary compact objects such as black holes. On the opposite end of the energy spectrum is a purely gas dynamical process that causes astrophysical clouds to coalesce. This occurence, uncovered while exploring the nonlinear dynamics of interacting clouds formed from thermal instability, is shown to be a genuine instability that is generic to multiphase environments. 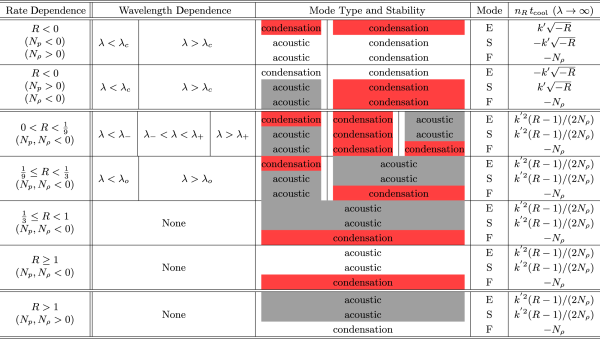 Thermal instability (TI) is a linear instability of non-adiabatic gas dynamics. While the linear theory was thoroughly worked out in 1965 by George Field, in this work we clarified some subtleties that arise when clouds become very large, meaning one side loses causal contact with the other (via communication through sound waves). We identified 7 regimes of instability, as summarized in the Table at left, which reveals that very large wavelength sound waves do not even exist in an unstable plasma unless it is unstable by both the isobaric and isochoric instability criteria identified by Field. The animations reveal that large (i.e. non-isobaric) clouds formed from TI tend to oscillate, and the cloud coalescence project above further demonstrates that such oscillations are also a generic property of multiphase gas dynamics.

This project follows up one led by Daniel Proga, where we laid some important ground work for several of the above projects, as there we showed how to simulate cloud formation due to thermal instability while self-consistently accounting for the radiation force that must become important as ions recombine. In this one we showed that adding flux variability can have interesting dynamical effects. And in another followup paper, we showed that common doublet lines can in principle be used to detect cloud acceleration along the line of sight.